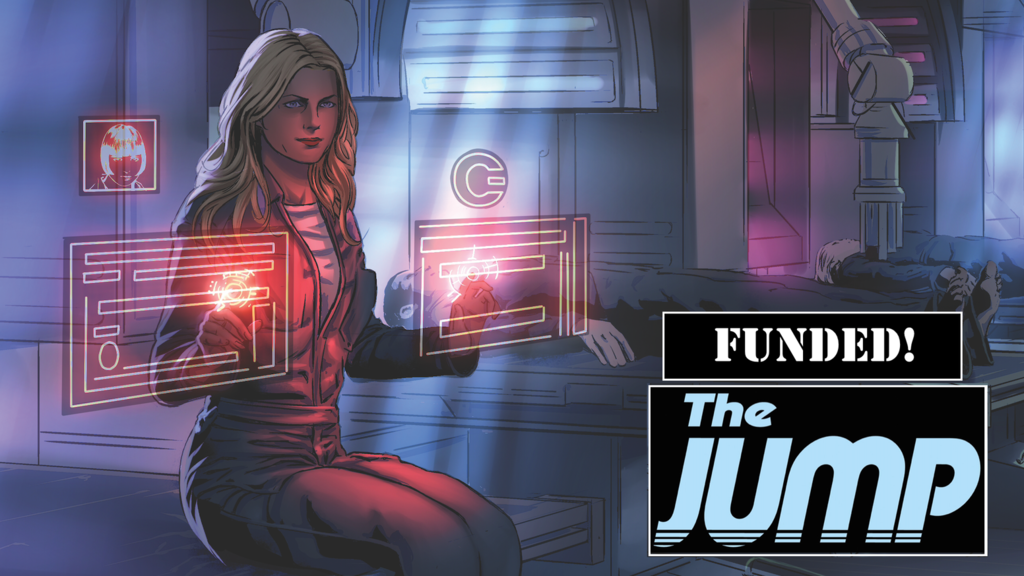 The books have arrived from Comic Impressions and they look spectacular (see below)! I've already started signing, bagging, and boarding... and my goal is to have everything out sometime next week. So...

This is your 48 hour/last call warning for address updates! If you need to change your shipping address for any reason, please do so via backerkit (thejump.backerkit.com). Backerkit should have sent you a "last call" email about ten minutes ago just to make things easy. That email will show you the address we have on file for you. And you can just click on their link to update things. Easy peasy.

As always, if you have any questions or concerns, don't hesitate to hit me up.

Stay safe out there!

I wanted to let you all know that the books have been printed and are steamrolling their way to me via UPS as I type this (see below). I'll hit you back soon with a fulfillment update, but I will most likely get everything out to you guys sometime next week. As long as USPS cooperates (big 'if' right now, unfortunately), you'll be reading THE JUMP #1 in two shakes.

Suffice it to say, you'll be getting a pretty damn attractive book in a couple of weeks.

I know that plenty of comic creators pledged this campaign. Well, if you've participated in the creation of comic, webcomic, comic strip, whatever, you have a say in who wins these things... and so, we humbly ask for your vote at RINGOAWARDS.COM!

Might I suggest that you also take a long look at my friend David Pepose's Spencer & Locke in the BEST SINGLE ISSUE category and his GOING TO THE CHAPEL in the PRESENTATION IN DESIGN category. Jason inman and Ashley Robinson also have a damn good book in that kids cateogry with Science! The Elements of Dark Energy.

Anyway, WATCH THIS SPACE! Fulfillment update coming VERY soon. As always, if you have questions or concerns, feel free to hit me up.

Talk soon! Stay safe out there!

I'm just stopping by to tell you about a really AMAZING project from my very good friend, Spencer & Locke creator David Pepose... THE O.Z. launched on Kickstarter this morning and it's taken off like a goddamn rocket.

David is a great writer and one of the very best guys in comics. I honestly can't recommend this title enough. Check out the preview below and the click that pledge button huh?

I just wanted to let everyone know that THE JUMP - Issue 1 was firmly in the printer's hands as of yesterday at around 5pm Pacific. I'll update you here once I have some specific delivery information from them. This is a very experienced, very dependable outfit, so I don't foresee any hiccups... but I am starting to hear tell of weird shipping delays from USPS, UPS, and the like on other Kickstarter projects... Hopefully, none of that affects us. As of today, we are firmly on schedule for the initially projected September delivery.

I also wanted to give everyone fare warning... Backerkit orders will lock in 48 hours and your credit cards will be charged shortly thereafter (only if you ordered anything extra via Backerkit, obviously). So, if there are any last minute additions you want to make, do so now. The Backerkit pre-order store will remain open - you'll still be able to scoop up extra issues and the like - but they may have to ship separately once those inital orders lock.

And, of course, you'll be able to edit your shipping addresses via Backerkit right up until I start the fulfillment process. I'll be sure to give you guys a 48 hour warning on that also when the time comes.

As always, if you have any questions or concerns, please feel free to hit me up.

Hope all is well! Stay safe!

It's been a while since I've checked in, so I thought I owed you a quick State of the Union. The Draw-Ins are complete and my letterer/production wizard is in the throughs of prepping the book for the printer. My guess is I'll have all of the materials over to them early next week. FYI - we're using Comic Impressions in Cape Coral Florida. They print all of Scout Comics' books... and so they have a long track record and come HIGHLY recommended.

That means I will probably lock Backerkit orders and charge credit cards for addons sometime next week. So, if you're thinking about adding one last thing, do it soon. The Backerkit store will remain open after that, but if you add something after the lock it may have to ship separately.

And don't worry... I'm told that you'll essentially be able to edit your shipping address right up until the time I print postage.

One intriguing development with the printer... most of you will remember that we had a PUT ME ON A COVER reward during the campaign. You could choose any of our four covers and we'd draw your beautiful mug onto it. We originally thought that we'd only be able to send prints to backers who chose this reward. Well, Comic Impressions is now telling us that we can actually put backers ONTO PHYSICAL ISSUES. So, if you decide you want to appear on the cover of a physical copy of THE JUMP, you can arrange that HERE. Folks who select this add on will receive TWO copies of the selected comic with their mug on it.

NOTE: The price has increased slightly to cover the added printing costs (it's all going to them).

You guys seemed to be having such a great time with the wacky ABERRANT and BANJAX variants (the feedback was INSANE), I thought I'd take a second to highlight a few more here. These aren't quite as pricey ($5 a pop), but they're just as fun...

There is tons more fun to be had on Kickstarter right now. Some friends have launched some campaigns recently and you should take a minute to check them out.

Skies of Fire takes place in the Aquilan Empire, a kingdom where airship travel has become the dominant means of transportation, commerce, and war. It's tons of dieselpunk airship adventure fun. This is truly one of the best books on Kickstarter and you should really give it a try if you have yet to.

Lovecraft-style monsters and their small-town high school...they're just not sure which is worse. You received Issue 1 of this series in your BONUS DIGITAL EXTRAVAGANZA. Well, the story continues! Check it out at the link above.

NEXT DOOR: A Neo-Noir Comic One-Shot

Next Door is the debut comic for writer/journalist Zack Quaintance, and the second Kickstarter for artist Pat Skott (The Space-Wolf). They're joined by star colorist EllieWright (Bettie Paige, James Bond) and star letterer Hassan Otsmane-Elhaou (Black StarsAbove, Join The Future). It's 30+ pages of crime comics meets the housing crisis, told through the dual perspective of a trendy privileged couple moving into an "up and coming" neighborhood...and the long-time residents they're pushing out. This neo-noir tale has hints of The Dregs, some BTTM FDRS, and just a bit of Stray Bullets.